Discover the alleys of the stone city

The city of Gubbio with its large territory is located in the north-eastern part of Umbria, between Tuscany and the Marches.

A predominantly mountainous area bordered to the east by the Apennine chain and to the west by the Tiber valley, it is rich in natural beauties and art treasures where history, culture and landscape coexist in a harmonious symbiosis.

Next to historical centers of extraordinary beauty and charm that preserve excellent testimonies of the medieval era, it offers a nature with uncontaminated environments and artistic craft productions that bear witness to the centuries-old mastery of a consolidated skill.

Gubbio is a center of 35,000 inhabitants, with historical attractions that date back to various periods. The Palazzo dei Consoli of the fourteenth century houses the largest collection of artifacts from the Roman era of Umbria.

Gubbio houses architectural masterpieces that symbolize and recall the power of this medieval city-state. 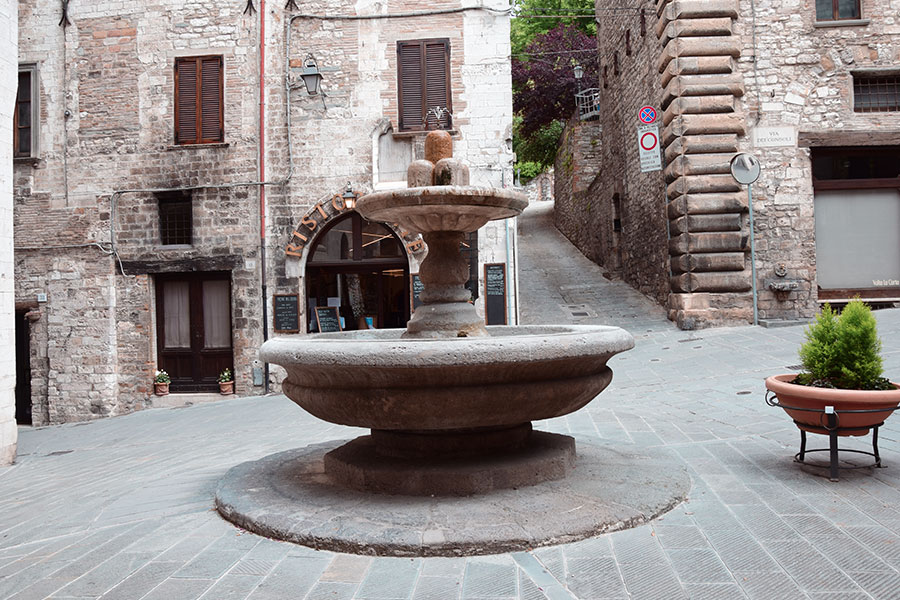 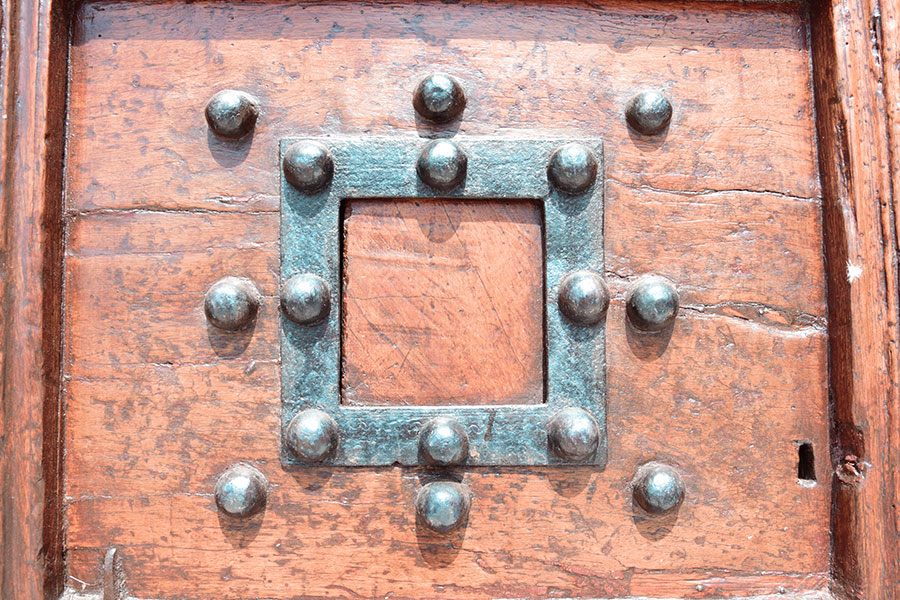 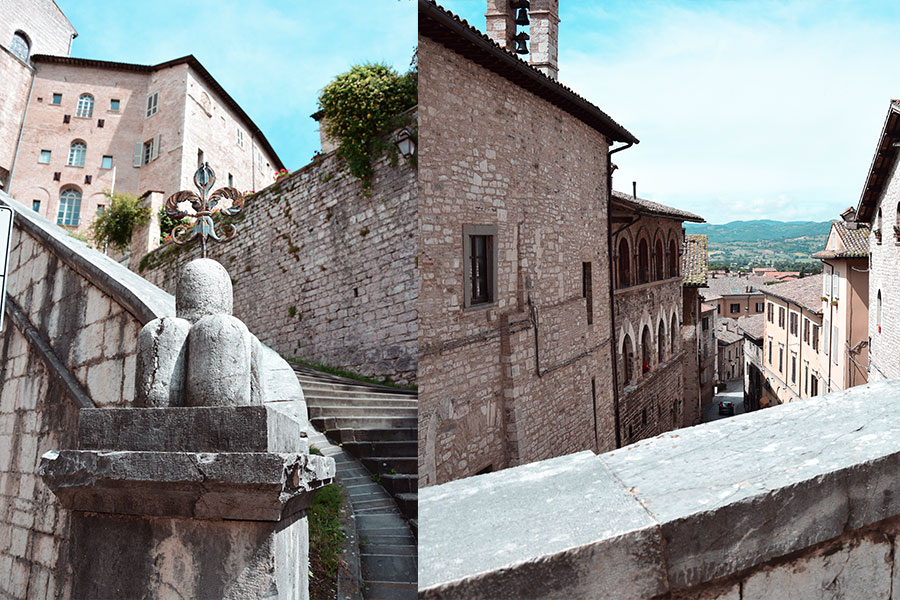 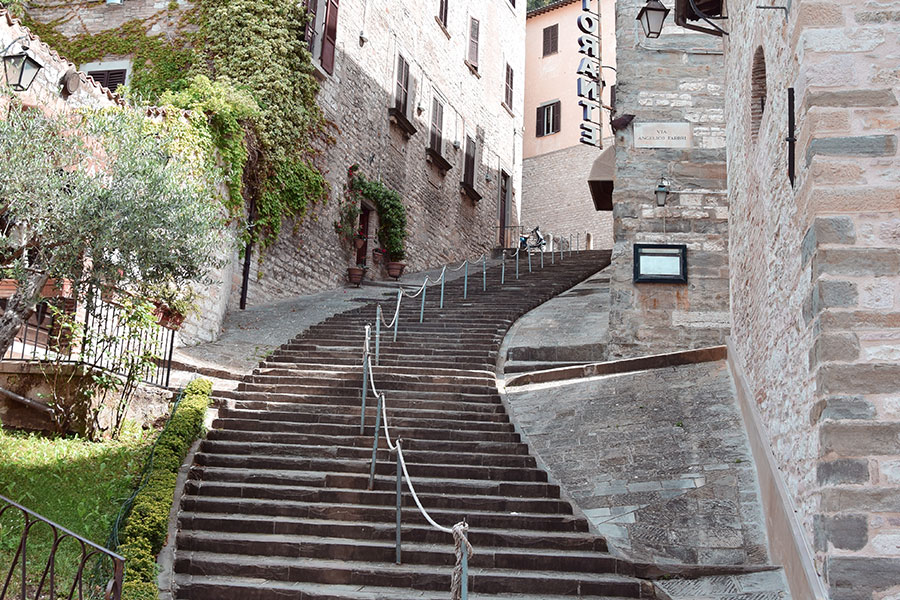 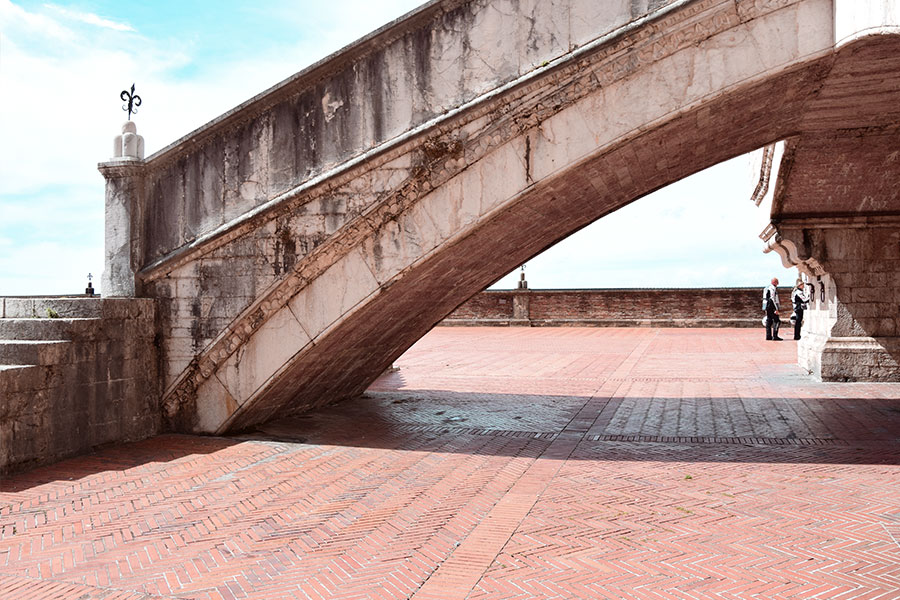 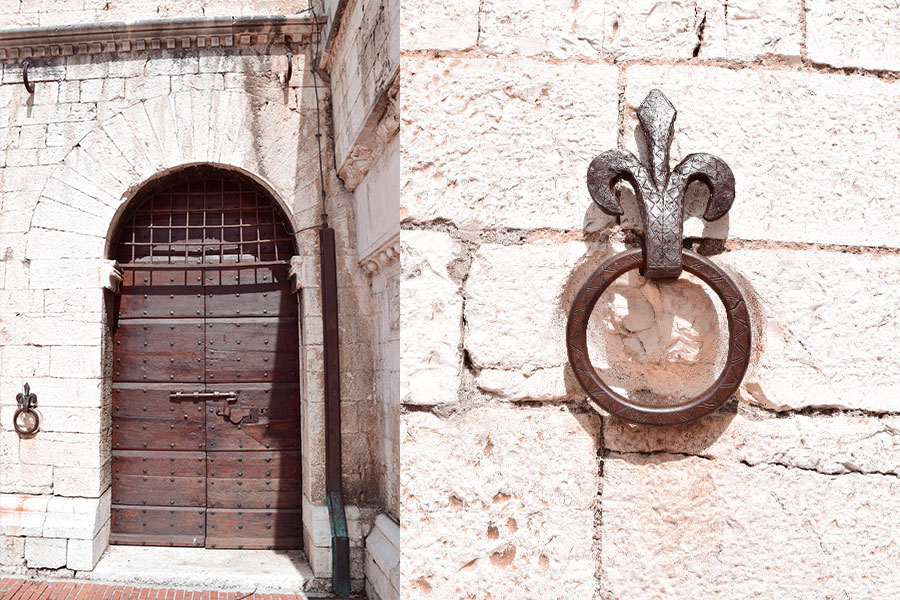 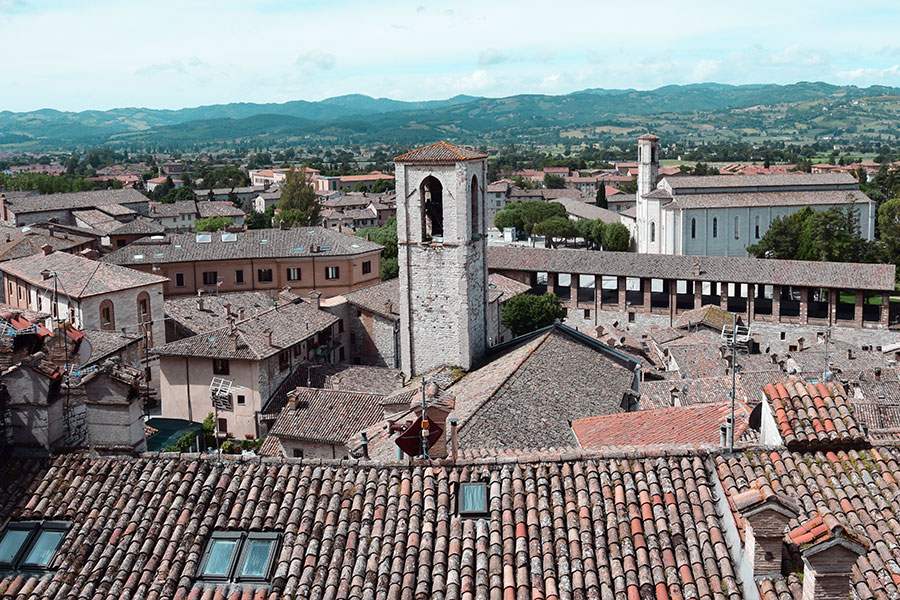 Traces of prehistoric settlements in the Eugubean territory have been documented since the Middle Paleolithic. Recent archaeological campaigns have led to the identification of sites of the Bronze Age, very close to the city.

Gubbio was an important center of the Umbrians, as evidenced by the Eugubine Tablets (III-I century BC), the most remarkable epigraphic relic of pre-Roman Italy. These are seven bronze plates that contain ritual prescriptions for particular ceremonies and also give indications on the order of the city-state Igigina.

Gubbio made an alliance with Rome since the third century. B.C. it became flourishing in the early days of the Empire, as evidenced by numerous archaeological remains, including those of the Roman Theater, still used for summer shows.
During the eleventh century Gubbio passed to its own municipal self-government. Both Barbarossa (1163) and Henry VI (1191) recognized the vast majority of jurisdictions and privileges of the Eugubino consuls.

Gubbio reached a large number of inhabitants, developed the arts (especially that of wool), were built the new walls and the impressive municipal buildings.

The domination of the Counts and Dukes of Urbino gave rise to a period of relative civil and artistic prosperity, especially under the rule of Federico di Montefeltro. With Federico began the construction in Renaissance forms of the Palazzo Ducale. The Eugubini remained loyal to the lords of Urbino even during the brief dominations of Valentino (1502) and Lorenzo dei Medici (1516-1519).

Later Gubbio passed to the State of the Church and in 1860, shortly after the annexation to the Kingdom of Italy, Gubbio was aggregated to Umbria.

To consult all the events in Gubbio connected to the site:

The other cities of Umbria a few kilometers from Fonte chiara 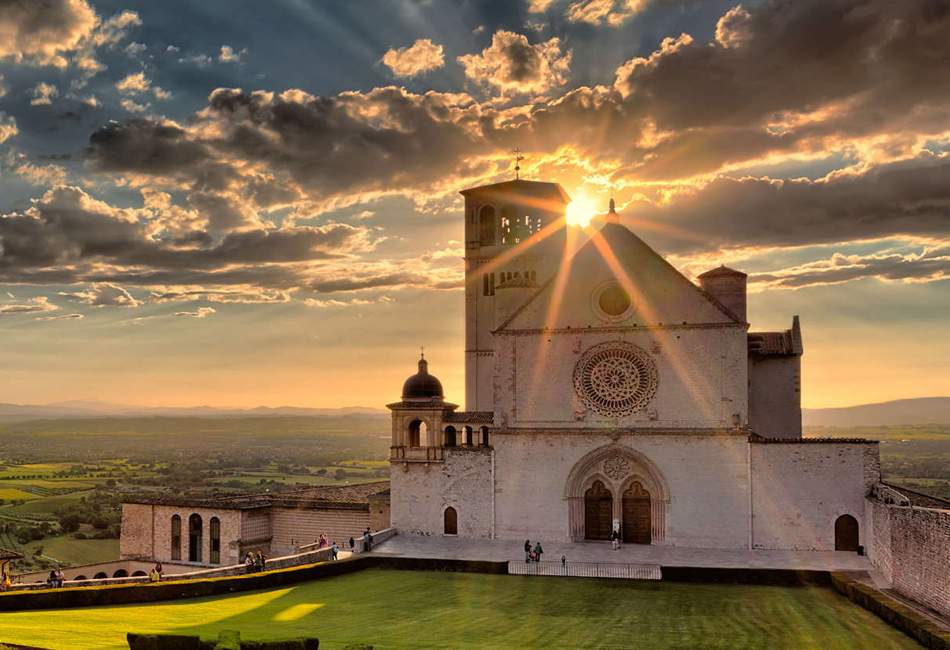 Famous are the Franciscan Sacred Convent with the Basilica, the fresco by Giotto, the fourteenth-century church of S. Chiara, the church of S. Maria Maggiore with the frescoes by Pinturicchio and the Rocca Maggiore, placed on a rise overlooking the city. 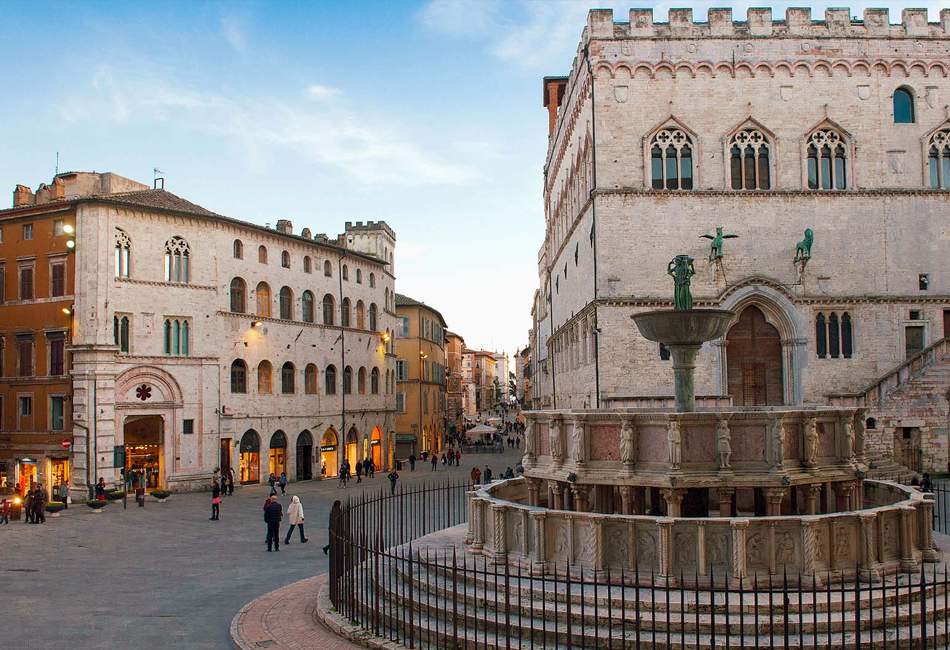 The city, already around the middle of the eleventh century, was organized, administratively, in five districts or villages, named by their medieval doors: Porta Sole, Porta Sant’Angelo, Porta Santa Susanna, Porta Eburnea, Porta San Pietro. The progressive urban expansion, as early as the thirteenth century, determined the extension of the villages outside the gates, developing a structure in the shape of a star. 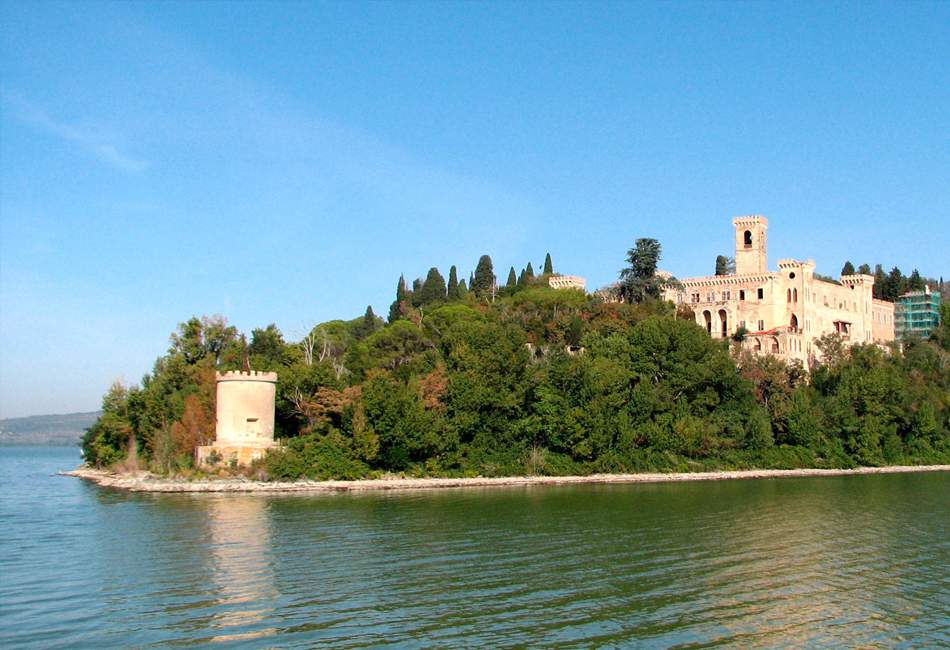 Lake Trasimeno is the largest body of water in the Italian peninsula, the fourth largest in Italy. Heart-shaped, it covers an area of 128 sq. Km. Its waters are at most 6m deep.

Observe Umbria from a unique point of view

In every season you can observe the beauty of the Umbria region from above! Observe the beautiful city of Gubbio from a particular perspective, experience an exciting adventure. For more information: 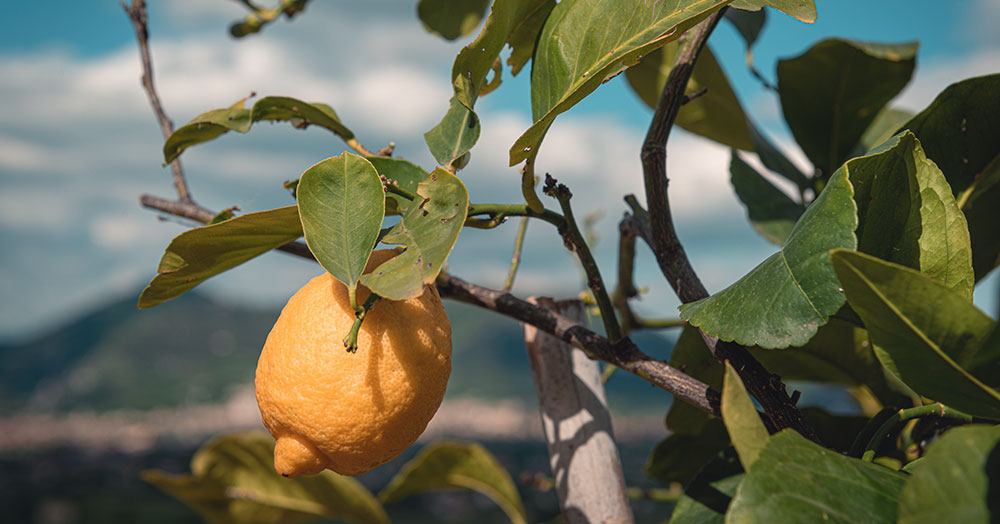 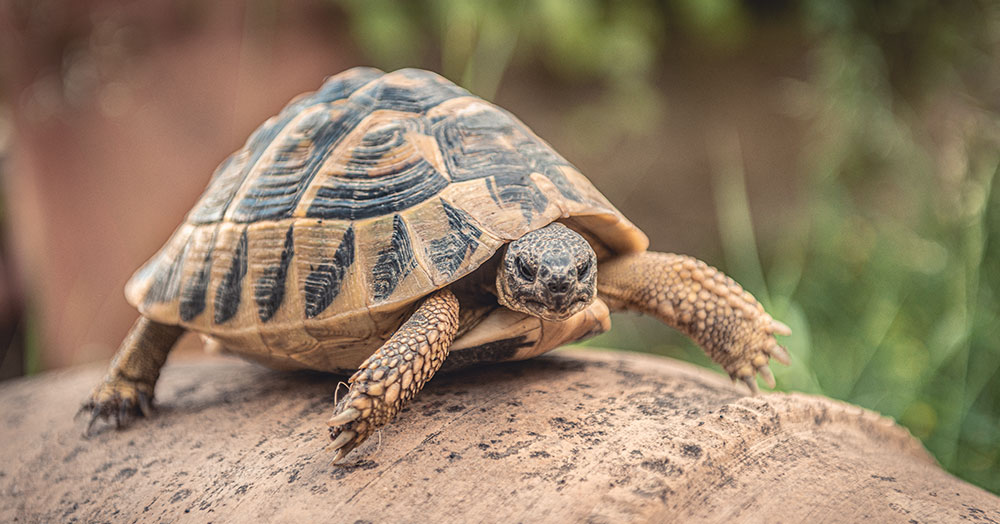 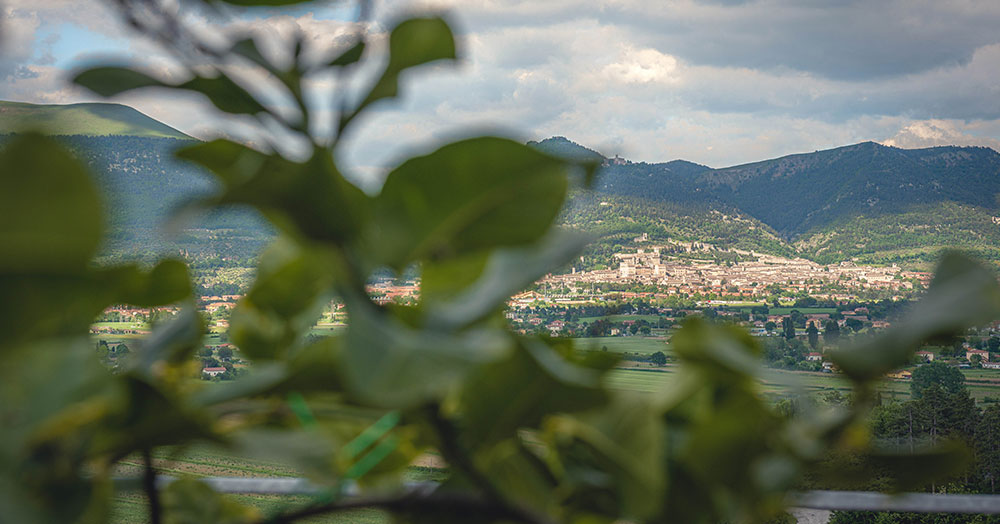 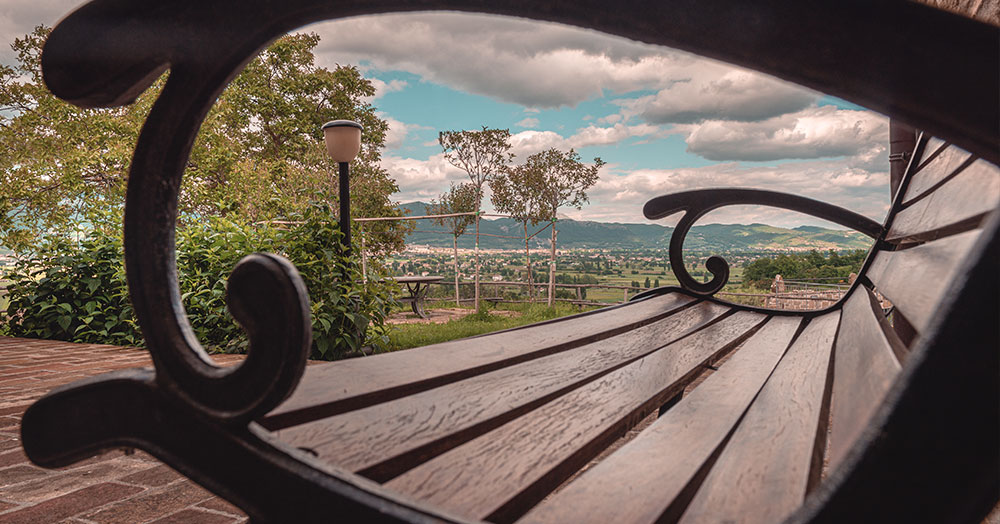 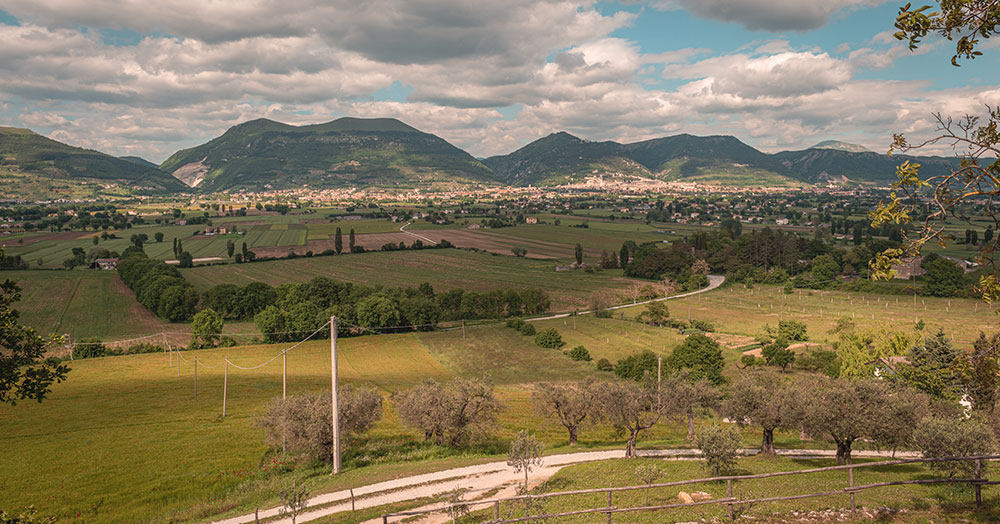 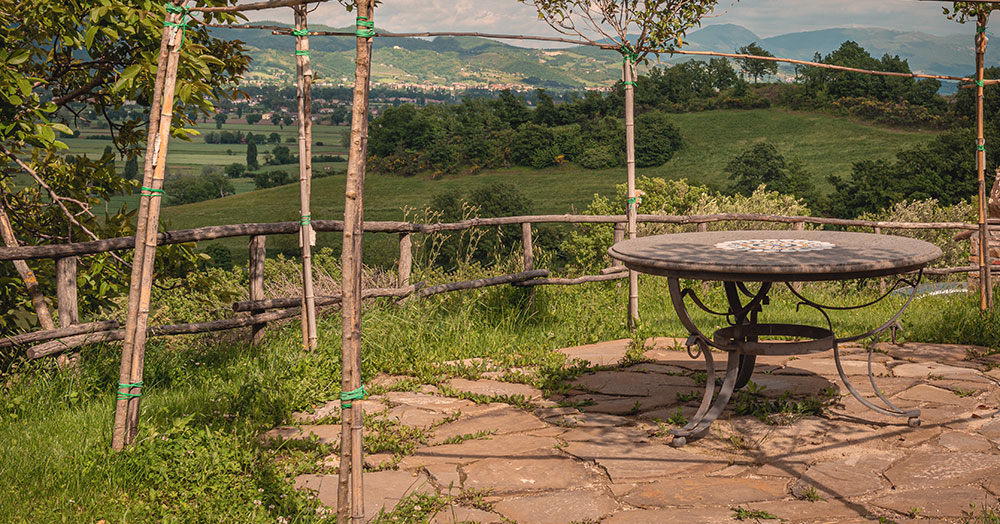 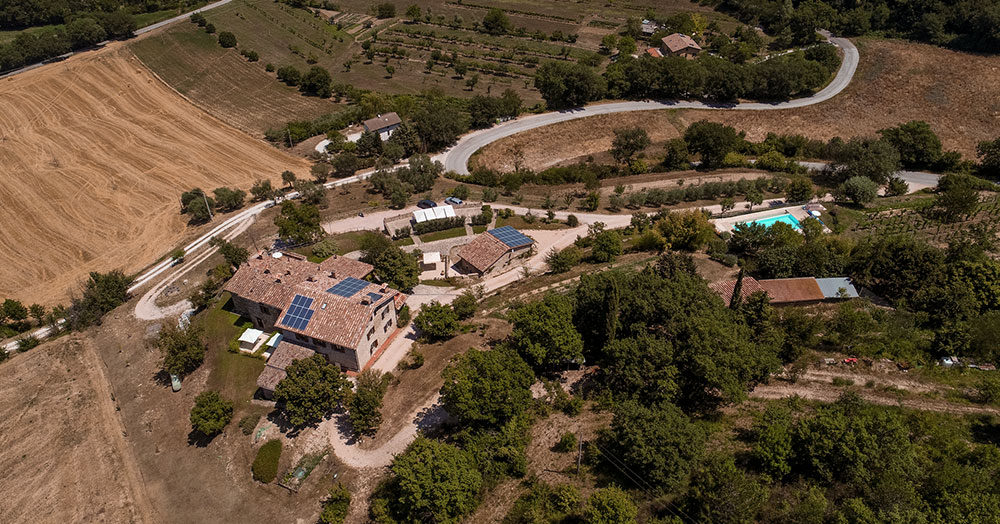 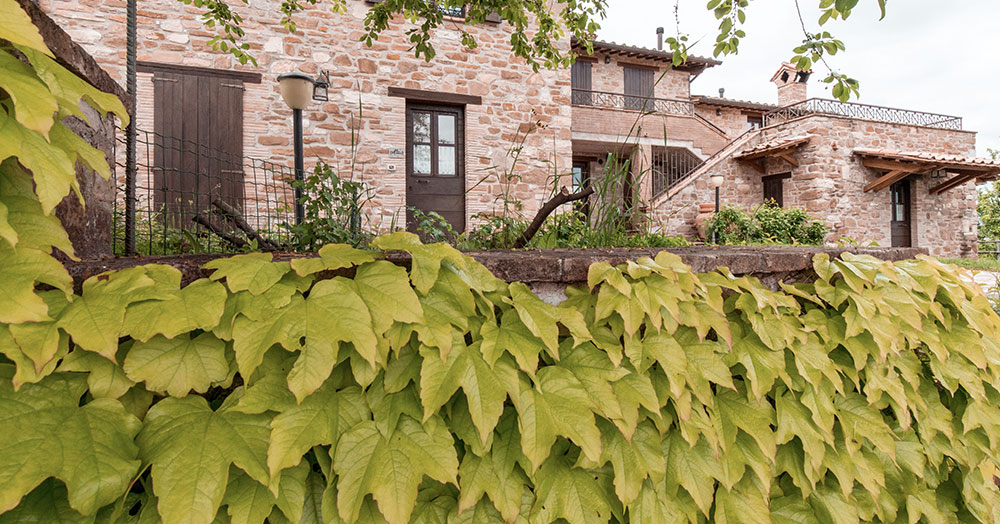 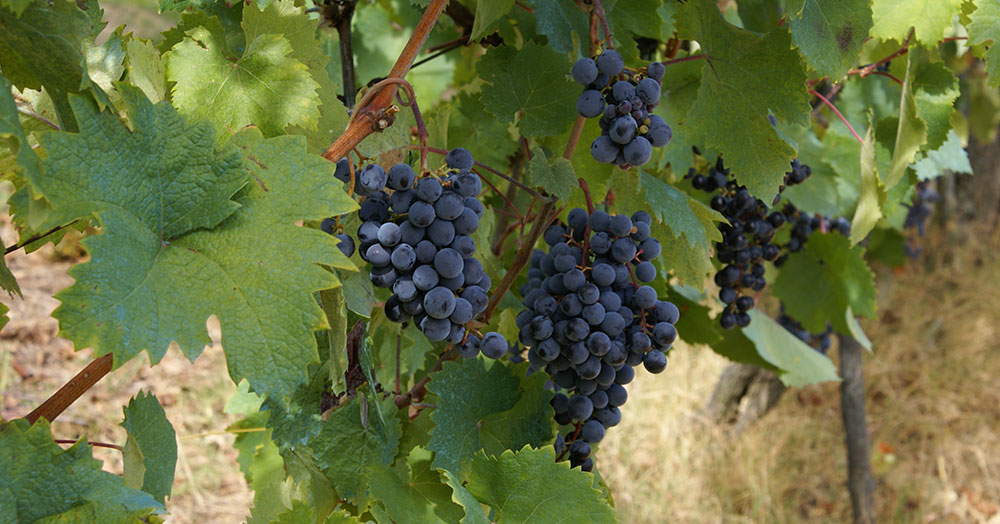 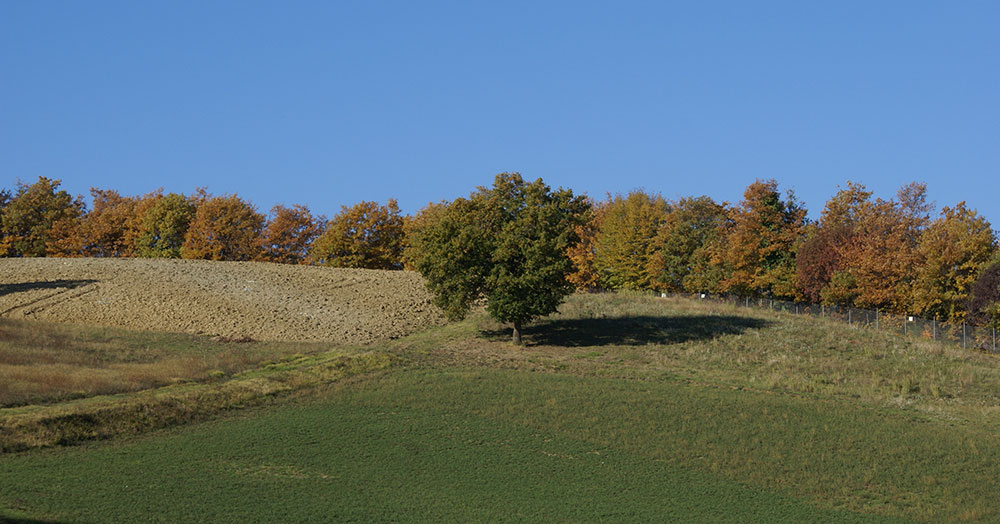 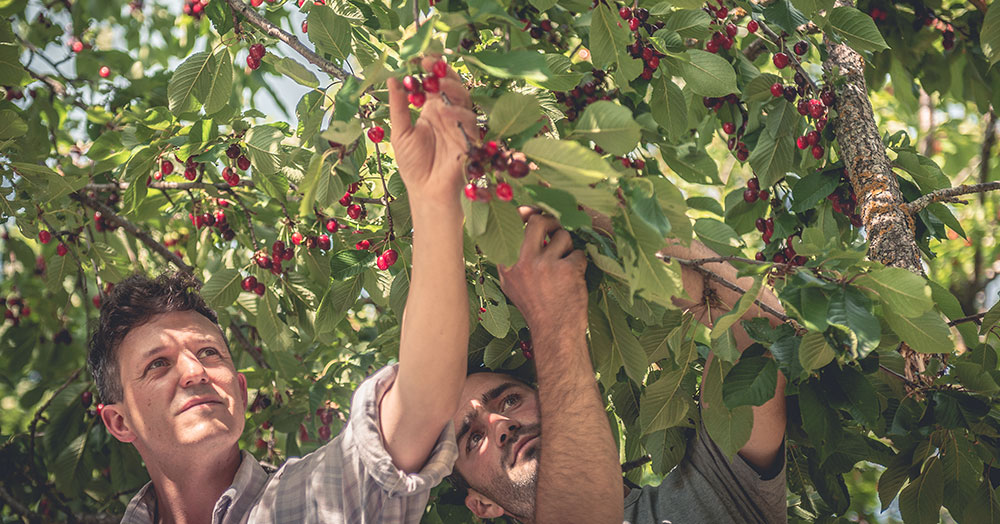 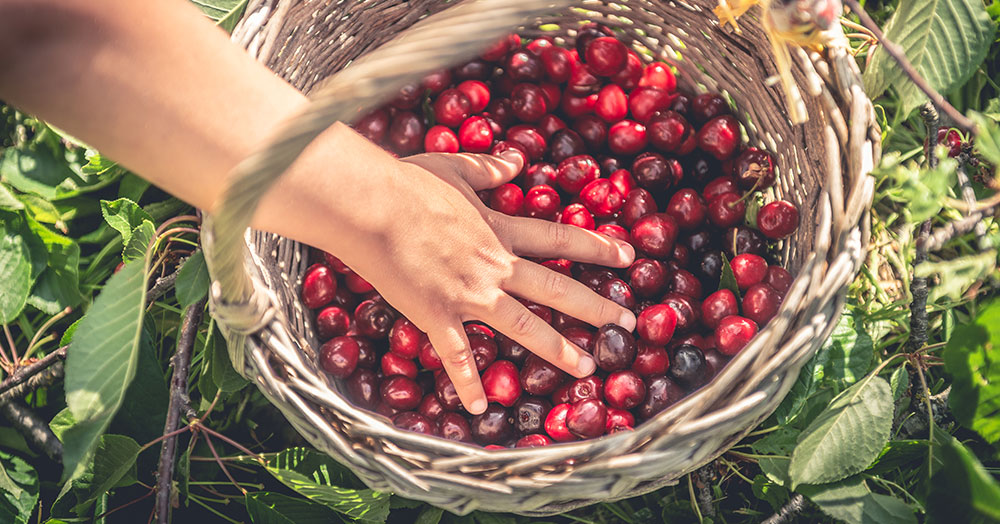 The Fonte Chiara farmhouse is located in Gubbio in a quiet and panoramic position, ideal for a comfortable and relaxing stay surrounded by nature. They can also be a convenient starting point for visiting the main cities of Umbria.

Book now, special price for you

Book at the best guaranteed price without intermediaries or commissions on other portals, click on the link on the side, check availability and book in real time

WHAT HAPPENS IN FONTE CHIARA 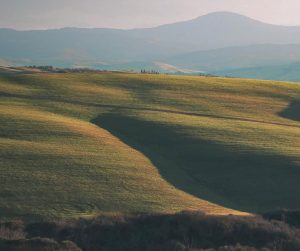 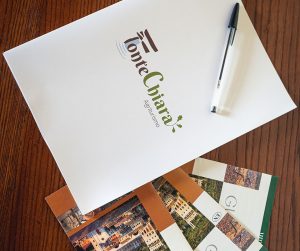 The restart and the events of the territory

25
Jun
We use cookies on our website to give you the most relevant experience by remembering your preferences and repeat visits. By clicking “Accept All”, you consent to the use of ALL the cookies. However, you may visit "Cookie Settings" to provide a controlled consent.
Cookie SettingsAccept All
Manage consent

This website uses cookies to improve your experience while you navigate through the website. Out of these, the cookies that are categorized as necessary are stored on your browser as they are essential for the working of basic functionalities of the website. We also use third-party cookies that help us analyze and understand how you use this website. These cookies will be stored in your browser only with your consent. You also have the option to opt-out of these cookies. But opting out of some of these cookies may affect your browsing experience.
SAVE & ACCEPT
Powered by